Why I think evolutionary algorithms can be superior to neural networks - A quick introduction to evolutionary programming with a simple algorithm to predict a polynomial from noisy data.

Despite the fact that neural networks have made major advances in many tasks, such as image recognition, video/image generation and the likes, I feel they inevitably suffer from a greater problem. Their intrinsic complexity enables them to make great progress as well as make them very hard to completely understand for us humans.

A neural networks with two hidden dense layers, 10 neurons each, consists of:

No one can safely predict, without great effort, what this (small) network does. It works just because backpropagation forces them to.

Evolutionary algorithms (EAs) are nearly as old as artificial neural networks. The principle they are based on is pretty straightforward:

An EA uses mechanisms inspired by biological evolution, such as reproduction, mutation, recombination, and selection. Candidate solutions to the optimization problem play the role of individuals in a population, and the fitness function determines the quality of the solutions [...].

In contrast to neural networks, their mode of operation can easily be understood and debugged. Their outcome can be as simple as a polynome (keep up reading :) ). And I state that they may be more flexible, because mutations can adapt the solution to changing circumstances.

Describing the process of an evolutionary algorithm is fairly simple with the above information. (1) First of all, a random population is generated. The individuals are evaluated (2) using the fitness function. With the known fitness values, a selection (3) of the population is drawn, so that the new population consists of adaptations of the fittest individuals of the previous population. The selection is then mixed up, mutated and allowed to generate offspring (4) resulting in the new population (1). This process is repeated until convergance or time runs out. 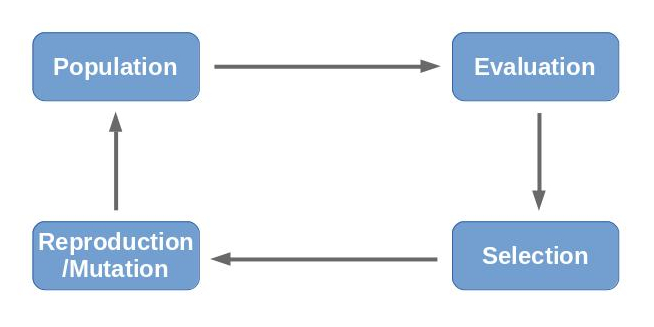 To stress out the simplicity of an evolutionary optimization I want to fit a curve from data with random noise. The data is generated according to the formula 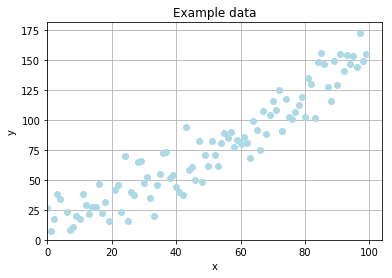 First of all we need a prototype for an individual. For the sake of convenience, I will start with an individual representing a linear function in the form

where \(a\) and \(b\) represent properties of the solution candidate, which can be mutated in the evolution process.

The mutate method iterates over the whole population, slightly changing a or b according to a random value between -0.5 and +0.5.

After running the simulation for 20 generations with a population size of 100 individuals per generation, I got to the result

The left plot shows how the best individual of each generation performs on the data. The right plot is the mean fitness of the population in each generation. Also notice the convergence of the algorithm after five generations.

We've learned, that a simple linear function is way too easy for our simulated evolution. So how it will perform on non-linear data?

The new noised data will be expressed by 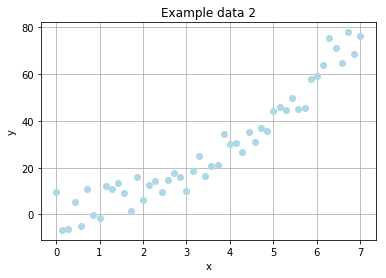 In order to face the new problem, some changes have to be made:

The negative RMSE should still be suitable as fitness function.

The new individual should consist of multiple terms \(t \in T\), each in the form of \(t(x) = {f} * x^{p}\), where f and p are properties of the term. The final prediction of the individual is the sum of all its terms:

The split into multiple terms allows the mutation step to add or remove terms, resulting in a polynomial of undefined order. The polynomial can mutate according to the input data without the need to define the desired form in advance.

The cleanup method is just a helper to reduce a polynomial to one term per order.

Instead of only modifying the parameters of a single term, we introduce two additional mutations adding or removing a term to/from an individual.

Due to the increased complexity, I ran the simulation for 50 generations and kept the population size at 100. The resulting polynomial was:

That's not as good a guess as the linear function from the first example. But a look at the prediction plot tells us the guess is still a good fit.

Evolutionary algorithms can definitely be used for curve fitting on linear and non-linear data. The whole process of optimization, mutation as well as the result can be easily understood, which is a huge benefit as opposed to using neural networks.

Since we can define individuals and mutations on our own, we are able to optimize the algorithm very well to a new problem, using our own ideas.

I can imagine great progress being made on evolutionary algorithms in the future and maybe even tackling domains, that today are reserved for deep neural networks and friends, since those are so appealingly simple.